How can you say no to a giant Jaegar?

Fans of the Pacific Rim franchise will recognize the LEGO Ideas Gypsy Avenger project and will want to further look at it.

Creator chubbybats decided to bring the big mech like suits to life with their LEGO ideas Project. As you may know, we are a fan of Pacific Rim and other big things that go smash, which is why we had to check it out. I mean we did cover the Hot Dog Mech.

This figure will have 14 points of articulation and will feature the plasma caster, chain sword, and rocket elbow depending on what scene you want to recreate.

Here are a couple more images of the Gypsy Avenger. 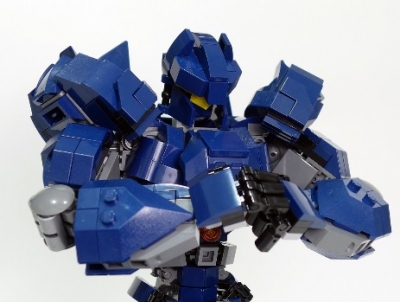 First of, we are super glad someone decided to tackle the Jaegers from the films. We always thought it would make an interesting LEGO set.

We love the direction they took with the creation of them.  It feels like these are a Hero Factory upgrade version which will offer a more dense feel and stability to it.

The only downside we see at this time is the lack of an opponent to fight. The creation of a Kaiju would be perfect but based on their structure, we do not think it would be an easy task.

At the time of this article, the project has 1,645 supporters with 365 days left.

What do you think of this LEGO Ideas Gypsy Avenger project?

Sometimes lesser known villains can provide more of a punch for the heroes.

When it comes to iconic staircases, this one is at the top of the list.

Thanks to some recent additions to our Skylander collection, Power Boy has decided it is time to give some of our duplicate […]

We have started seeing the newest OTS toy release from the wrestling world with the WWE Create-A-Superstar. These new action figures will […]