Fans of the hit Netflix series, Strangers Things, are going to love what will be on the shelves just in time for season 2.

McFarlane Toys will be kicking off a new series line, Stranger Things figures, this Fall to help celebrate one of the breakout shows of 2016.

The toy company had released previously impressive figures for Spawn and The Walking Dead. This time around they tackled this television show.

They are planning on featuring various characters from the series and will kick things off with Eleven and Chief Jim Hooper.

Each figure is going to have 12 plus points of articulation and will come with corresponding accessories commonly associated with the character.

They will be sealed in retro style packaging and available in either 7-inch of 10 inch.

Check out the images of the Stranger Things Figures from McFarlane Toys. 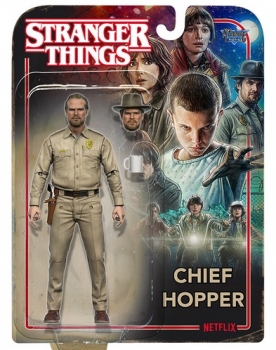 The figures will have a MSRP of $19.99 and will be available this Fall.

Would you consider picking up these Stranger Things Figures?